What Is Solar Panel? How does a solar panel work?

Home/Solar Panel/What Is Solar Panel? How does a solar panel work?
Previous Next

What Is Solar Panel? How does a solar panel work?

Solar energy begins with the sun. Solar panels (also known as “PV panels”) are used to convert light from the sun, which is composed of particles of energy called “photons“, into electricity that can be used to power electrical loads.

Solar panels can be used for a wide variety of applications including remote power systems for cabins, telecommunications equipment, remote sensing, and of course for the production of electricity by residential and commercial solar electric systems.

On this page, we will discuss the history, technology, and benefits of solar panels. We will learn how solar panels work,  how they are made, how they create electricity, and where you can buy solar panels.

A Short History of Solar Panels

The development of solar energy goes back more than 100 years. In the early days, solar energy was used primarily for the production of steam which could then be used to drive machinery. But it wasn’t until the discovery of the “photovoltaic effect” by Edmond Becquerel that would allow the conversion of sunlight solar electric energy. Becquerel’s discovery then led to the invention in 1893 by Charles Fritts of the first genuine solar cell which was formed by coating sheets of selenium with a thin layer of gold. And from this humble beginning would arise the device we know today as the solar panel.

Russel Ohl, an American inventor on the payroll of Bell Laboratories, patented the world’s first silicon solar cell in 1941. Ohl’s invention led to the production of the first solar panel in 1954 by the same company. Solar panels found their first mainstream use in space satellites. For most people, the first solar panel in their life was probably embedded in their new calculator – circa the 1970s!

Today, solar panels and complete solar panel systems are used to power a wide variety of applications. Yes, solar panels in the form of solar cells are still being used in calculators. However, they are also being used to provide solar power to entire homes and commercial buildings, such as Google’s headquarters in California.

How Do Solar Panels Work?

Solar panels collect clean renewable energy in the form of sunlight and convert that light into electricity which can then be used to provide power for electrical loads. Solar panels are comprised of several individual solar cells which are themselves composed of layers of silicon, phosphorous (which provides the negative charge), and boron (which provides the positive charge). Solar panels absorb the photons and in doing so initiate an electric current. The resulting energy generated from photons striking the surface of the solar panel allows electrons to be knocked out of their atomic orbits and released into the electric field generated by the solar cells which then pull these free electrons into a directional current. This entire process is known as the Photovoltaic Effect. An average home has more than enough roof area for the necessary number of solar panels to produce enough solar electricrity to supply all of its power needs excess electricity generated goes onto the main power grid, paying off in electricity use at night.

In a well-balanced grid-connected configuration, a solar array generates power during the day that is then used in the home at night. Net metering programs allow solar generator owners to get paid if their system produces more power than what is needed in the home. In off-grid solar applications, a battery bank, charge controller, and in most cases, an inverter are necessary components. The solar array sends direct current (DC) electricity through the charge controller to the battery bank. The power is then drawn from the battery bank to the inverter, which converts the DC current into alternating current (AC) that can be used for non-DC appliances. Assisted by an inverter, solar panel arrays can be sized to meet the most demanding electrical load requirements. The AC current can be used to power loads in homes or commercial buildings, recreational vehicles and boats, remote cabins, cottages, or homes, remote traffic controls, telecommunications equipment, oil and gas flow monitoring, RTU, SCADA, and much more.

The Benefits of Solar Panels

Using solar panels is a very practical way to produce electricity for many applications. The obvious would have to be off-grid living. Living off-grid means living in a location that is not serviced by the main electric utility grid. Remote homes and cabins benefit nicely from solar power systems. No longer is it necessary to pay huge fees for the installation of electric utility poles and cabling from the nearest main grid access point. A solar electric system is potentially less expensive and can provide power for upwards of three decades if properly maintained.

Besides the fact that solar panels make it possible to live off-grid, perhaps the greatest benefit that you would enjoy from the use of solar power is that it is both a clean and a renewable source of energy. With the advent of global climate change, it has become more important that we do whatever we can to reduce the pressure on our atmosphere from the emission of greenhouse gases. Solar panels have no moving parts and require little maintenance. They are ruggedly built and last for decades when porperly maintained.

Last, but not least, of the benefits of solar panels and solar power is that, once a system has paid for its initial installation costs, the electricity it produces for the remainder of the system’s lifespan, which could be as much as 15-20 years depending on the quality of the system, is absolutely free! For grid-tie solar power system owners, the benefits begin from the moment the system comes online, potentially eliminating monthy electric bills or, and this is the best part, actually earning the system’s owner additional income from the electric company. How? If you use less power than your solar electric system produces, that excess power can be sold, sometimes at a premium, to your electric utility company!

There are many other applications and benefits of using solar panels to generate your electricity needs – too many to list here. But as you browse our website, you’ll gain a good general knowledge of just how versatile and convenient solar power can be.

How Much Do Solar Panels Cost?

Prices for solar panels has decreased substantially in the last couple of years. This is great because, the cheapest price and other applicable incentives, NOW is the best time ever to invest in a solar power system. And, consider this: a solar power system costs about the same as a mid-sized car!

Where can I buy solar panels? 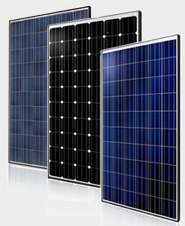