India has become a new battleground for “pv wars”

India has become a new battleground for “pv wars”

To protect domestic solar panel makers from cheap Chinese competitors, India plans to impose tariffs of 70 per cent on imports from China.

India has become the latest battleground for “pv”, a “war” around protecting homegrown solar panel makers from cheap Chinese rivals.India’s regulator is planning to levy a tax rate of 70% import tariff, and the country’s solar developers warn that the move could make the country’s rapid development of solar power industry to a halt.

India’s electric field of a few large solar energy developer, are for the country’s regulator is put forward, on imports from China, Malaysia and more developed economies of the solar cell levy a tax on emergency plan to fight.The plan is likely to have a big impact on China’s solar cell industry.China has increased its exports of solar cells to India partly because of China’s oversupply.

A Group of India’s biggest solar panel makers has called for the tax, led by Adani Group, a billionaire businessman controlled by Gautam Adani.

Their claim was endorsed by the general administration of safeguards (DGS).The agency said it would propose a tariff of 70 per cent, effective immediately, for 200 days until the agency reached a longer-term conclusion on the issue.

The report also caused a small solar cell maker, criticism, they say, regulators will solar power into the duties within the scope of raw materials, to make them greatly increased the cost of solar panels.The adani group will soon be one of a handful of Indian companies that make solar cells (solar panels are assembled from these cells).

“The duty is to kill us,” said Abhinav Mahajan, director of IB Solar, a Solar cell manufacturer near Delhi.

The price of solar panels imported from China has fallen over the past two years, allowing solar power developers to slash the expected cost of building new solar farms.

But some in the industry have recently begun to warn that such a low offer is unsustainable, and it is difficult to maintain such an offer once solar panel prices rebound unexpectedly.

India’s solar panel makers welcomed the tax, saying it was a good thing for Mr Modi to boost India’s manufacturing sector, which Mr Modi himself calls “made in India”.

Mr Adani would not comment on the initial conclusions of the Indian safeguards agency.But Dhruv Sharma, chief executive of Jupiter Capital, another company involved in the petition, disputes the claim that the tax will hurt India’s solar power industry.“If there is no manufacturing in this country, how will they sell cheap electricity?”“We want cheap electricity, but beyond a certain point, we don’t have manufacturing,” he said. 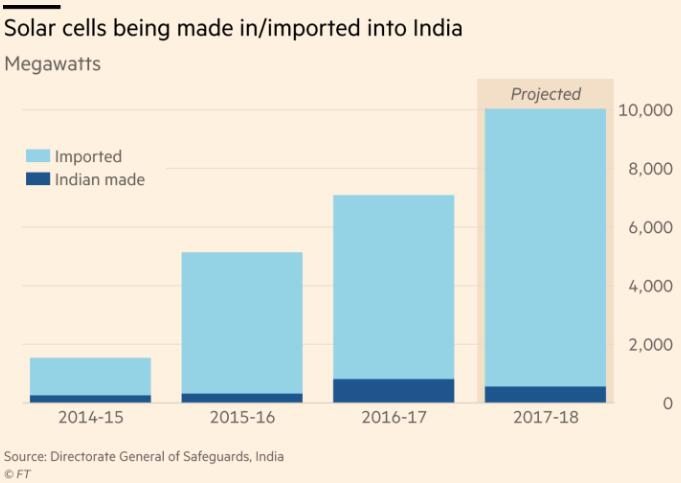